The first registered Dexters were imported into South Africa in 1917 by Mrs Conroy, of Paarl in the Western Cape. R.T. Robinson of Dublin bred these animals and the bull La Mancha Chief was allocated registration No. 1 in the South African Herd Book, while ten females were allocated the first ten numbers in the female section. All the cows were imported in calf and Mr. Robinson registered the first calves, resulting in fifteen females and six bulls with La Mancha prefix, forming the base of Dexter in South Africa.

In 1921, Lady Philips of Somerset West in the Western Cape, imported four cows from the Bucklands herd of Lady Fitzgerald. Then in 1936, she imported the bull, Grinstead Water Baby from Lady Loder, as well as cows from the Beneden, Oakridge and Lindsays herds. Sir Lionel Philips Bart continued the breeding and, interestingly enough, a large number of animals bearing the Vergelegen prefix were sold to the Department of Native Affairs (Union Buildings, Pretoria) and were used to upgrade the cattle of the indigenous black tribes.

In 1938 Dr. E.N. Nobbs, of Lyndoch in the Western Cape, imported a bull, Ashtonhayes Manager (of Grinstead breeding), along with seven cows from the Pentre and Colomendy herds. In all, these imported Dexters formed the nucleus of South African Dexters for the next 15 yea 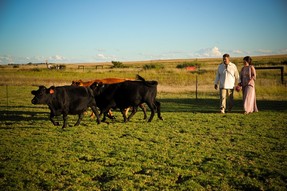 rs, spreading to further regions of South Africa and neighboring countries. Then in the early 1950's, the number of Dexter imports increased in conjunction with the wool boom. The sudden and dramatic increase in the price of Merino wool provided farmers with the financial means to invest in such livestock. These imports boosted the Dexter population in the arid Karoo regions, where Dexters were already popular with sheep farmers. Dexters could be handled in the same handling facilities as sheep and were excellent foster mothers for orphaned sheep. It was quite common to see as many as six to eight lambs suckling on one Dexter cow as she grazed on the short sclerophylous shrubs that grew in these arid areas. Dexter cows also supplied milk for workers at outposts on large sheep farms. Some cows were milked for three or more years without being mated, because only one or two cows were kept at an outpost.

Between 1950 and 1970, cows from the Grinstead (21 cows), Atlantic (8) and Parndon (23) as well as from sixteen other herds (22) were imported, bringing the total number of females imported during this period to 82. With the additional imported in dam heifer calves, the resultant total of imported females to South African soil was nearly 140 cows. At the same time, 12 bulls from 8 different overseas herds were imported. Three were imported from the Grinstead herd of the Dowager lady Loder (Clock house, Coxfold, Sussex) while another three were from the Atlantic herd of Mr and Mrs W.R.N. Tanner (Rookley Manor, Rookley near Ventnor, Isle of Wight).

In 1953, the Dexter Cattle Breeders Society of South Africa was established by 13 foundation members, at Colesberg in the Karoo. They were soon affiliated to the South African Stud Book, responsible for the registration of all Dexters as well as all other breeds of cattle, sheep, goats, pigs and horses. Currently, the society has about 65 members that are stud breeders and stud herds vary in size from a few to over 200 animals. Commercial Dexters are very popular in South Africa and far outnumber the registered population. More recent trends of Dexter use include the utilization of Dexters as foster mothers for dairy bull calves.

Cross breeding has become very popular with commercial herds, and even with some stud herds, due to the outstanding cow efficiency (more than 30 % better than the best beef cow) of the Dexter in a cross breeding program. Cow efficiency, defined as the weaner weight at seven months divided by the weight of dam at calving, is one of the most important economic factors. It is often the case that the weaner for seven months is much taller than his dam and weighs nearly 70 % of her calving weight. In addition to these attributes, the high milk production and low maintenance requirements make the Dexter cow the ideal mother line in beef cross breeding program.

The ease with which Dexters can be transported to the bull, handled with limited facilities and kept on a small holding, make them very popular around all major cities in South Africa.